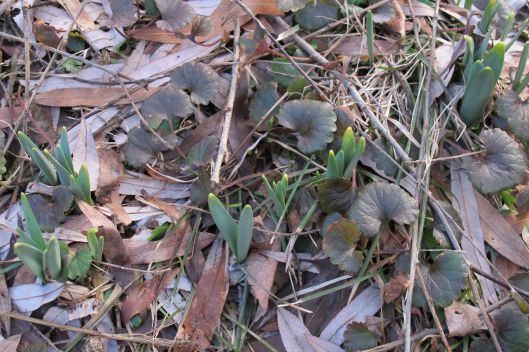 It is an April evening sometime in the past, and I am standing outside on my back deck. The air is chilly, but it has lost much of winter’s cutting edge. As the light slowly fades, I am suddenly awash in waves of sound. It is the high-pitched trilling of the spring peepers.

I’m a spring baby. My March 21st birthday falls either on or adjacent to the official first day of spring. But living in New England, I scoff at those who believe in Punxsutawney Phil’s February prediction, or even the date on the calendar. Spring’s arrival is much later and more nuanced than all of that.

In fact, long, hard experience tells me that waking up on my birthday means I’ll be facing another 4-6 weeks of winter. It often isn’t until late April or even early May that I can bear to shed the layers of wool, fleece, and cashmere that protect my neck, hands, and ankles from cold, outdoor air.

When spring finally does arrive, the first buds appear slowly, almost reluctantly, until they gradually gain momentum and then, like the peepers’ loud and insistent declaration, the season asserts itself all at once in a flush of cheery, Easter egg colors.

The earliest signs of spring have gained a more personal meaning over the twenty odd years I’ve lived in my house just west of Boston. Their yearly return has become a reminder of my own resilience.

It begins with the daffodils. When we first moved here, they were far from my favorite flower. Yet I’d dutifully buy several bunches of the straight, yellow-tipped stalks when they arrived at the office each spring during the American Cancer Society’s annual campaign.

I’d plunge them into a vase of water, set them on my desk, and pretty soon the buds would open into daffy yellow schnozzes that reminded me of mole snouts, or some exotic creature from Down Under.

Then, one September I bought some narcissus bulbs — their more restrained colors and less prominent proboscises made them seem more sophisticated than the lowly daffodil. I planted them alongside a patch of day lilies and promptly forgot about them.

That winter, I had a health scare that required an unexpected medical intervention in late March. A few weeks later, I noticed the dark green stalks of narcissus pushing up through the frosty soil. “Welcome to the other side,” they seemed to say. My shoulders relaxed and for the first time in many weeks, I believed that I’d be okay.

Six years later, there was another medical procedure — this time a surgery in early December, scheduled months in advance. Remembering how much the last batch of bulbs had meant to me, I bought an even bigger bag that fall, and planted them under a willow tree in full view of the kitchen window. The act was a promise to myself. I would make it through the tough winter to come and when the plants emerged from the ground, I’d be here to welcome them.

Eight years later, it is April again. A few weeks ago, I celebrated my 60th birthday, and right now I am standing outside on my back deck. Until just recently, the yard was knee-deep in snow. Today, however, I can see clumps of green shoots around the base of the old willow tree, and I strain my ears, eagerly listening for the opening notes of the peepers’ joyful chorus.

When I hear it, I’ll know. Spring is here. 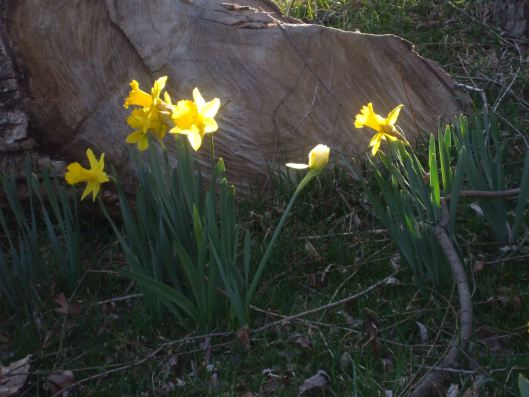 This post was written in response to An April Invitation at Women’s Voices for Change.