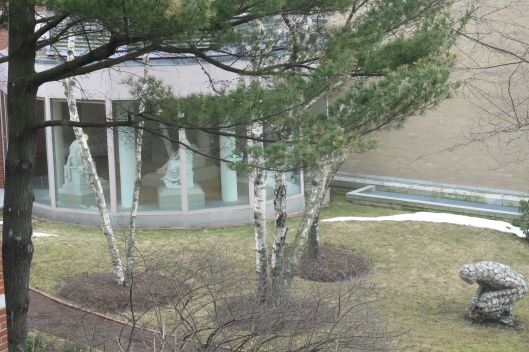 When I’m about to embark on something new, different, and a little daunting, I often  remind myself  to “go with the flow,” stay in the present, and loosen my grip on the controls. I imagine myself diving off a cliff and taking a very long ride down into a warm, welcoming sea.

Putting away my expectations, hopes, and fears and just taking the new adventure one step at a time allows me to release the burdensome stones that tend to accumulate during everyday life. 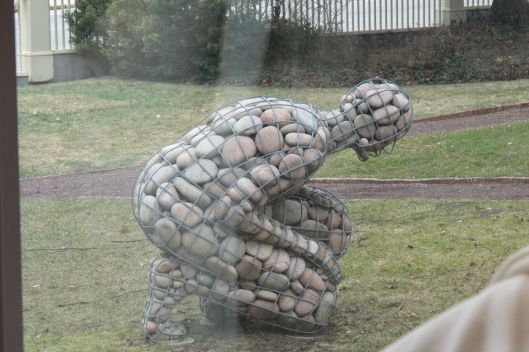 It’s like spring cleaning for the mind. We take a few steps back, 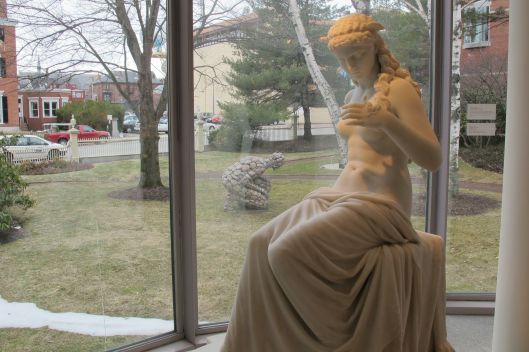 put the past aside, 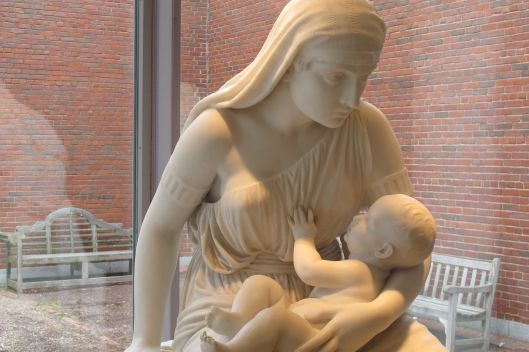 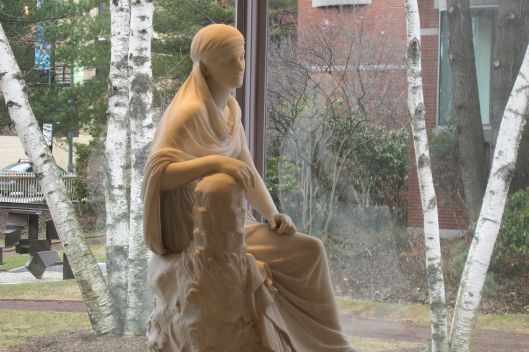 and step into the light. 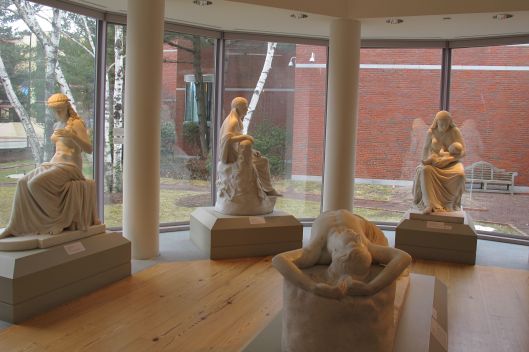 The photos above were taken at the Portland Museum of Art in Portland, Maine. Walking into this atrium was like stepping into a serenity bath. These figures are locked in their quiet reveries for all time. Standing among them, I felt all the residual heaviness I’d accumulated over the past winter vaporize under their cool gazes.

Stuck as they are, these statues remind us that we can lighten our mental load by letting go of those tightly held ideas that hold us back. Instead of jumping in to make “wise” pronouncements about people and things, we can instead bolster our wisdom by simply holding still and taking the time to listen and observe.

In a few days I’ll be traveling to new places. The landscape, culture, and people will be very different from what I am used to. We won’t even speak the same language. So that I don’t miss anything and take it all in, I’m going to follow my own advice. Mentally, at least, I’m packing light. 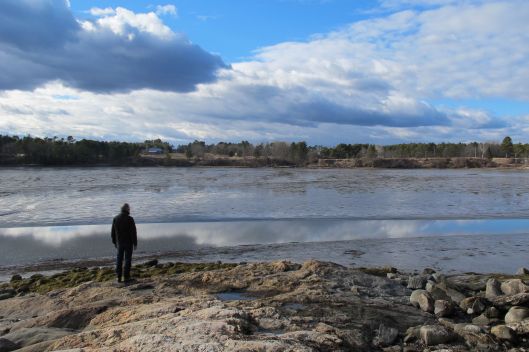 My 90-year-old stepmother lives in a nursing home now. Paul and I visited her this past weekend. It’s depressing to see a once active person slumped in a wheelchair, her mind and body brought down by Parkinson’s disease.

We don’t have a lot of choice as to what our final days will be like. No one wants to end up like my stepmother. She certainly didn’t. But beyond the uncontrollable, how do we make our final years count?

While I have a ways to go before I hit “old age,” (I turn 58 this week), I do think a lot about what I want those years to be like. Why do some people remain vital and continue on in their sunset years as they have their entire lives? Part of it depends on luck and genetics, which determine whether your body and mind remain functional.

But given reasonable health, pursuing a passion or continuing to engage in meaningful work helps us stay alive in the fullest sense of the word. We have to remain curious. We have to stay in love with life.

The following duet between Tony Bennett, who is 86, and 70-year-old Aretha Franklin, illustrates that point beautifully. At first glance the song seems to be about love and maintaining a relationship with another person, but they could also be singing about staying in love with life.

This past weekend we lost an hour as we turned the clocks ahead to daylight savings time. The change feels a bit premature, as we are still deep in winter here on the east coast. The hard cold is gone for the moment, but I’m still chilled. (In fact, I’m writing this while under a down comforter with a heating pad and Karina at my feet.)

We’ve had a few glimpses of the sun, but overall its been pretty grey. In fact, we had another snowstorm on Friday. 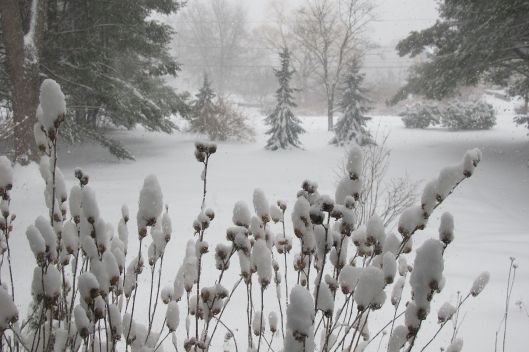 The rose of sharon that hangs out under our front window put on its winter hats yet again. 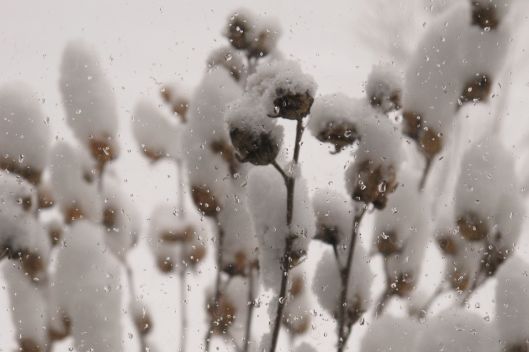 In this house, we are all a bit weary of hats, gloves, scarves, and snowshoes or ice cleats — all necessary for a walk in the woods.

I won’t be sad to see winter go, but I will miss its mysterious and beautiful light. It makes me pay attention. 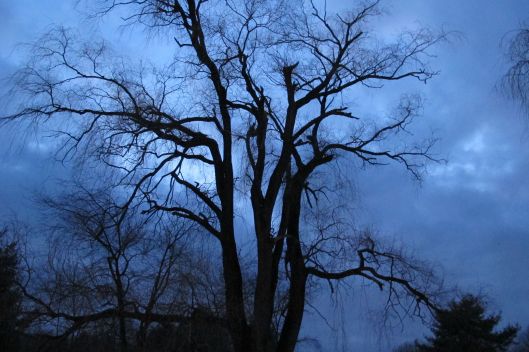 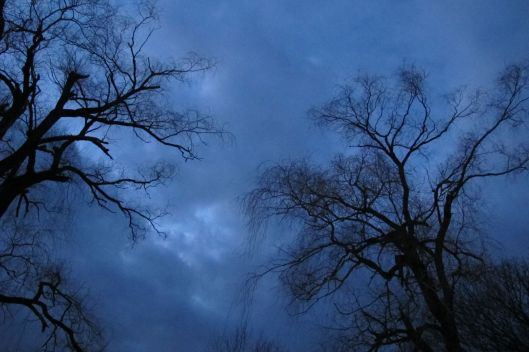 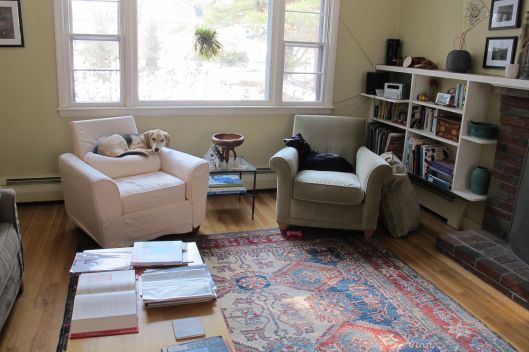 It’s the weekend and after a busy week at the computer, I am taking the day off. There is so much I want to write about, so many thoughts crowding in, but none are yet ready to make the transition from brain to paper.

Instead, I’ll share a few photos from our mid-February week of dog sitting.

Zoe came on a Tuesday. She is a black and white dynamo and Karina’s closest friend. She is a year or two older than Karina and had a litter of puppies before Kathleen rescued her.

Being more worldly than Karina, Zoe likes to introduce her to new experiences. For example, she has instructed Karina in the fine art of humping (as I said they are very close friends) and demonstrated for her how to chew a carrot, explaining why that’s better than burying it in your bed.

The two of them tussle constantly, even when they are at rest.

The Saturday after Zoe arrived, Kola was dropped off. She is an eight-year-old Rhodesian ridgeback. Kola is the dignified older sister we all wish we could have. She may occasionally act as though she is above the antics of her younger siblings, but in truth she hates to miss out on anything.

Being an older, bigger dog, Kola reminds me of our Hobbes when he was in his prime, and because of that she has captured a special piece of my heart. She is always eager to help in the kitchen and stands politely at my elbow when I’m cooking, ready to catch any stray ingredients before they slide to the floor. Whenever we return from a human-only excursion, Kola always greets us with a shoe in her mouth. As it happens, she comes from a family of shoe people.

The morning after Kola arrived, the three dogs enjoyed Sunday breakfast together and then took a moment to sit for the camera. 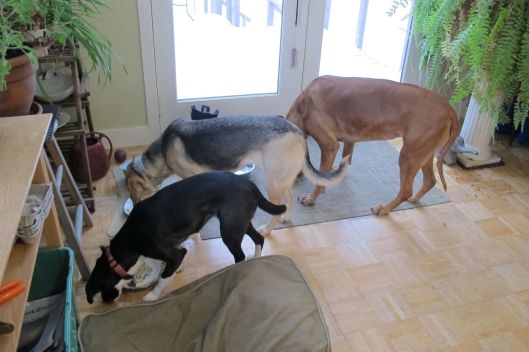 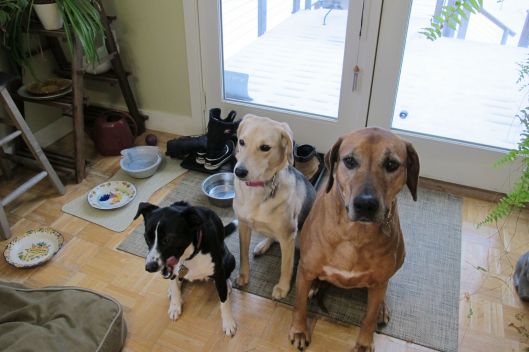 After the morning walk, there were naps. Zoe and Kola commit to their daytime snoozes with every fiber in their bodies. 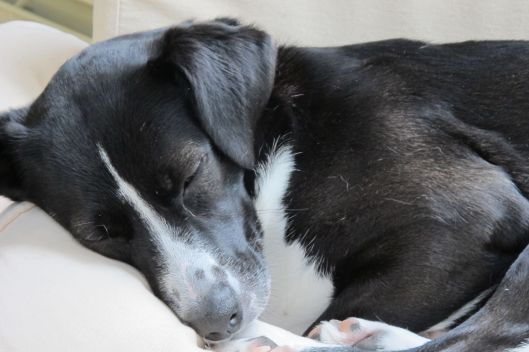 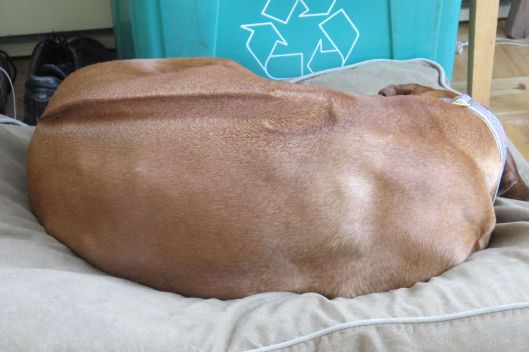 While as hostess, Karina keeps an eye on things. 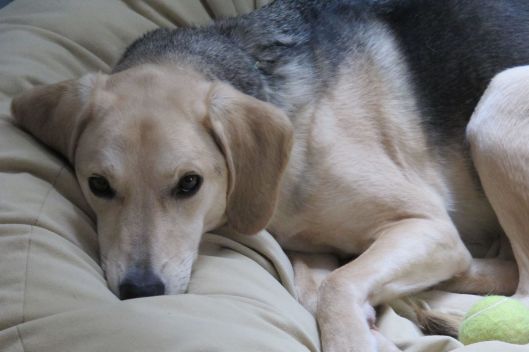 In fact, she’s a diligent hostess, getting up each night in the wee hours to make sure her guests are still safely tucked in.

At the end of the weekend, Zoe went home and a few days later, Kola did too. 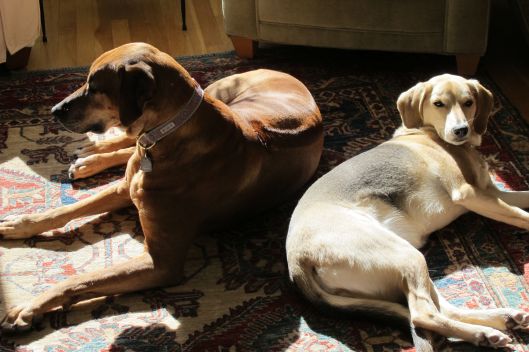