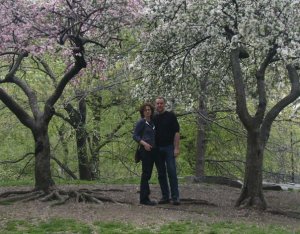 At the last minute, on a rainy Thursday, my husband suggested that we go into Boston to visit a favorite museum. With this seemingly innocuous request, my personal tectonic plates began grinding away. Thursday is a work day. I should be at my desk writing, not wandering around a museum like a person on vacation. Didn’t he understand that I was on a schedule? That routine is the anxious person’s lifeline when navigating unfamiliar terrain?

In the end I calmed my inner earthquake, put my work aside, and went. I wasn’t on a tight deadline, and after all, spontaneous weekday excursions are exactly the kind of thing we had fantasized about when we were both working full-time.

Such a choice is a great problem to have. Yet ever since Paul announced his intent to retire after 32 years at the same company and start working for himself, I’ve often found myself trying to steady my roiling emotions.

He was already working for this large technology company when we met. Over the years he worked his way up from quality control inspector to mechanical engineer. That work, combined with my own income, helped us to buy a house, to raise, educate, and launch our two sons, and to do a bit of traveling.

When I was diagnosed with early-stage breast cancer, the benefits that came with that job covered my treatments. With the exception of the year when Paul was bumped down in pay and position due to cutbacks, his company seemed, from my perspective, both steady and reliable.

The same has not been true for my own employment. While I have worked for a variety of organizations since my youngest son was in nursery school, I was laid off the summer before Paul’s announcement. Now in my mid-50s, I am nowhere near ready to retire. Yet the prospects for regular employment, especially for a writer in an evolving publishing environment, are uncertain.

So I was nervous—at times even panic-stricken—about letting go of that security blanket. But I also wanted to support Paul’s dream of being his own boss and doing more satisfying work. For the past couple of years he’d been doing carpentry for friends. Now, at age 62, he wanted to turn that hobby into a second, part-time career.

After a lot of talking, we began some serious research. Together, we met with a financial planner. She believed that Paul’s modest pension, combined with his carpentry business, could keep us afloat, especially when she factored in his retirement savings and Social Security.

We both left those meetings elated. Yet, while he remained buoyant, my nagging fears would seep back in. For me, those meetings brought up a host of issues— and they weren’t all financial.

Having faced my own mortality at the early age of 39, I was suddenly faced with his. Why else would the financial planner recommend that he take out a generous life insurance policy? Because he might die someday and leave me alone.

Also, even if he wasn’t going to die soon, he was clearly getting older. Would the day come when my still-agile husband couldn’t climb ladders, use power tools, or beat our sons at ping pong? It might.

Well, if that’s the case, then he should retire. Today! I countered to myself. After all, stress takes years off your life. His previous job was a hotbed of stress. Also, if he’s getting older, then so am I, and we’d better have a few adventures while we still can!

My mood swung back and forth as reliably as a pendulum. I’d go from being the supportive, enthusiastic spouse I wanted to be to one who got snippy at the slightest provocation. My inner control freak went into overdrive—a few crumbs left on the kitchen counter suddenly became a major offense.

Eventually, the happy thoughts outshouted the grimmer ones. And as we kept talking and planning, we were both convinced that it was time to turn what had become a shared dream into a reality. So he set a date for early June.

Six months later, the alarm clock is silent. We get up when we wake up, eat breakfast, and discuss our plans for the day. There are still many adjustments. For example, because he no longer keeps a set schedule, he’s often at home when I need to work. He doesn’t always remember that writers can’t write and answer questions at the same time.

He’s learning though. In fact, we both are.

This piece was originally posted on Women’s Voices for Change.